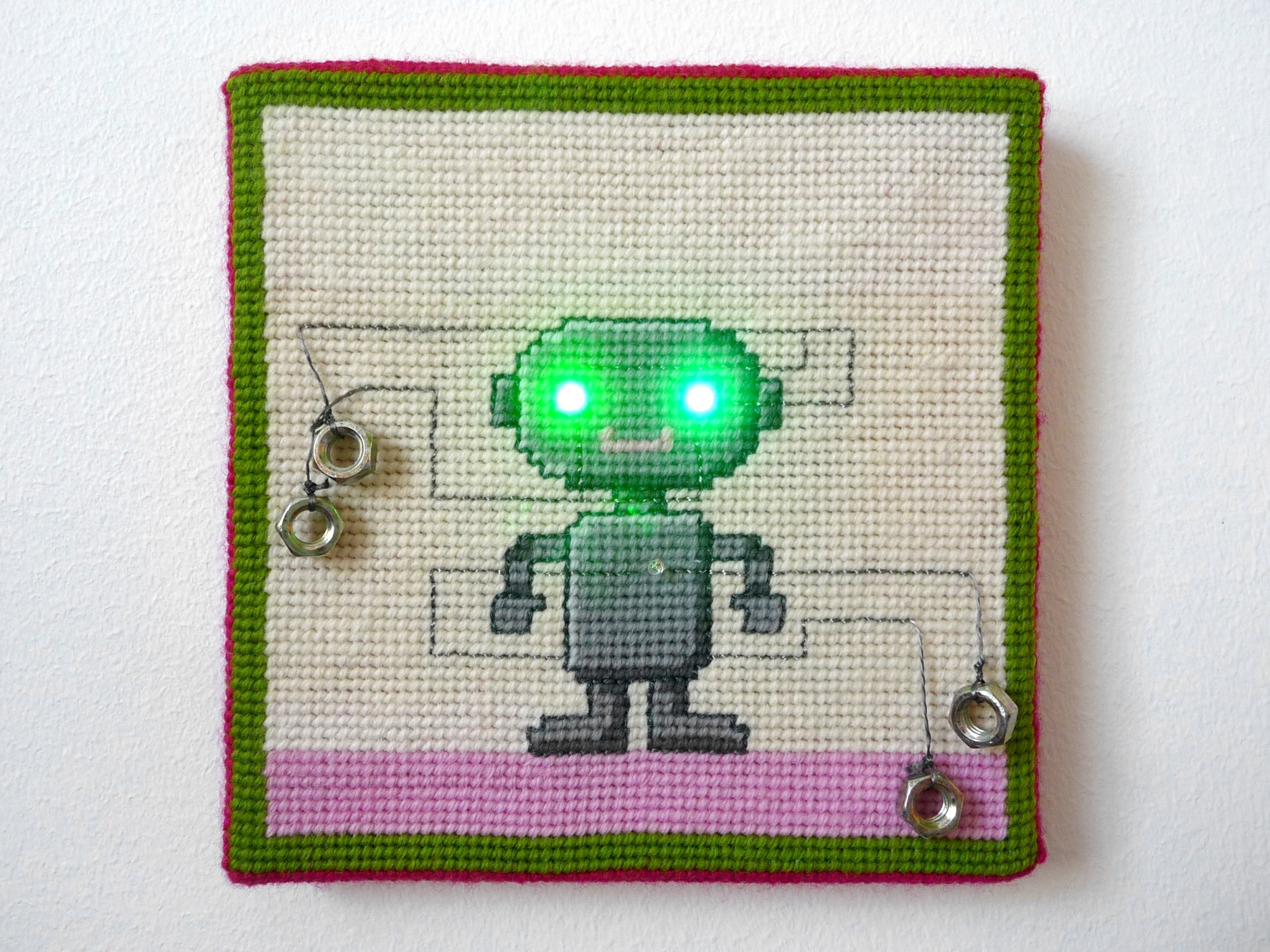 Needlepoint Robo is my embroidery project for e-embroidery workshop organized by Pixelversity, held at Pixelversity office at Helsinki Cable Factory on 17.-18.3.2012. The workshop explored the crossovers of traditional embroidery and electronics, combining crafting traditions with open design and DIWO (Do It With Others) attitude.

As an experienced crafter (actually I’m not that experienced in embroidering, I’m more into knitting and crocheting, but in general I’ve done a lot of handcraft projects and tried different techniques) I became interested in the workshop right away when I had read about it in the Helsinki New Media Locomotive blog. Crafting with electronics was something I had never done, my experiences with wires and electric circuits were limited to physics assignments in the middle school, so there was also something new I could learn.

In the workshop there were nearly 20 enthusiastic crafters with different skills and styles. Kässämartat (a more traditional crafter society) were invited as tutors, to help the other participants with their stitching expertise and also to learn something new themselves. 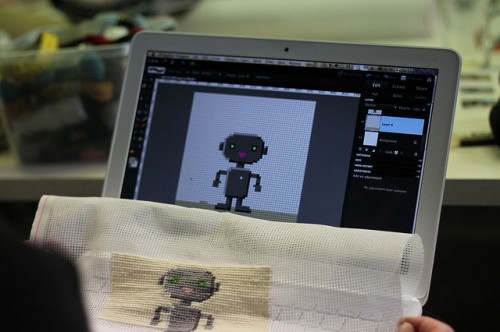 My technique of choice was needlepoint because I was already familiar with it and I like its pixel-like structure — it’s easy to sketch the designs in Photoshop and then move them into fabric. I tried to find an idea where the LED lights would be an essential part of the design and not just attached on top of a random image. I got an idea about a small robot with green LED eyes and red LED heart — kind of a love child of E.T. and Terminator. At first I just cut a piece of canvas and started to stitch, believing it would be easy to develop the design within the crafting process. The only ready thought I had was leaving the conductive threads visible in the work so that the idea of a battery-powered robot would show in the finished work. I planned to outline the robot figure with conductive thread and drew the electric circuits to the pattern in Photoshop to make it easier to follow the (+) and (-) threads. I needed two power sources to light three LEDs, one for the heart and the other for the eyes.

I planned to use leftover tapestry wool yarns from my old stock like I always do (I try to avoid buying new materials whenever possible). Soon I noticed I didn’t have the colours I would like to use and I would also need to buy canvas frames and some electronics materials like sewable coin cell holders (I didn’t like the idea that was presented for us in the workshop, about making a holder for the coin cell out of wool felt, because the cell inside a wool pocket would not be easily replaceable). 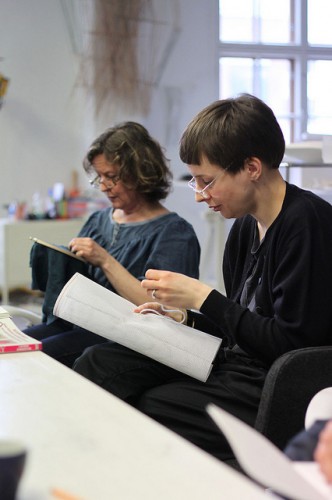 After working on my design for a while I found out that my it was a bit too ambitious for a two-day workshop. I couldn’t even finish the embroidery part, let alone start the electricity work. So I had to talk with the organizers, mainly Ramyah Gowrishankar, who was the sewable electronics expert, about the possible problems related to using the conductive yarns that I might experience when continuing the work at home.

Continuing the stitching at home was easy at first. After a while I noticed that I had designed a 15x15cm pattern, but the smallest canvas frames available at the art supply store were 16x16cm. So I had to stitch a thin green frame to the picture to make it fit into the frame. Stretching the canvas into the frame, fastening it using a staple gun, moistening the canvas and letting it dry was also relatively easy, because I had done similar works before. After the stretching was done, I noticed that the free space behind the canvas inside the frame was quite small and working with the electronics would require some dexterity.

Then I tried outlining the robot with conductive thread. It didn’t work because the thread that was available at the workshop was too thin and invisible. Later, when I used the new, thicker threads I had ordered from an online electronics store, I found out that the robot figure was too small for that idea — there would be too little space for the batteries behind the work. So I had to redesign my pattern so that the robot would be outlined with ordinary perle cotton and the conductive links would be mainly outside the robot. In the new design the coin cell holders were hidden behind the head and the feet of the robot. 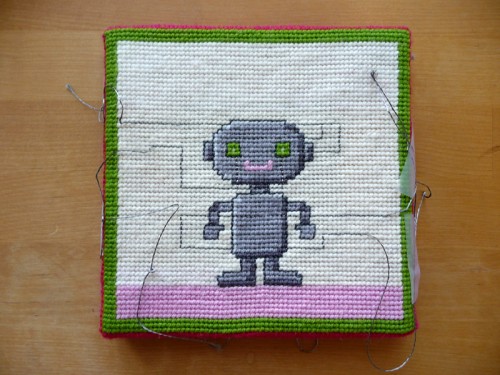 Creating the electric circuits was easier than I had first thought. It was relatively easy to follow the instructions I got from the workshop. Drawing the circuits to my pattern in Photoshop before stitching also helped a lot, it was easier to follow the (+) and (-) threads using visual guidance. The only problem within working with the electronics was the amount of the loose thread ends — I stitched all the circuit lines first and attached the LEDs and the coin cell holders after that and it was a bit difficult to keep the threads apart from tangling to each other (using some tape also helped with that). Working with the LEDs and the coin cell holders in the small space inside the canvas frame was a bit difficult, at some points I needed to use small pliers to move the needle. 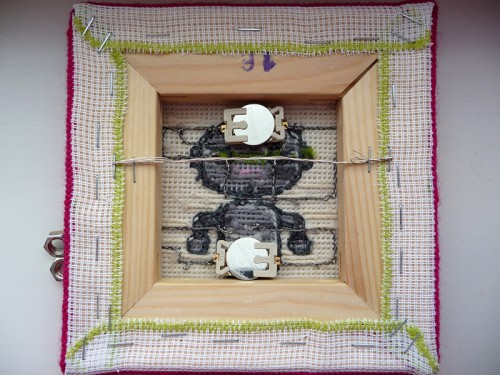 I didn’t want to use sewable snap fasterners as switches, because they were too difficult to open — the viewers of the work would need to use their nails to separate the parts of the snap fastener from each other. I wanted the switch to be easily handled so that the LEDs wouldn’t be on all the time but the viewer would be able to quickly swich them on and off. So I used old leftover nuts (I needed some super glue to attach the nuts to the threads permanently), how they work can be seen in the following images of the finished work: 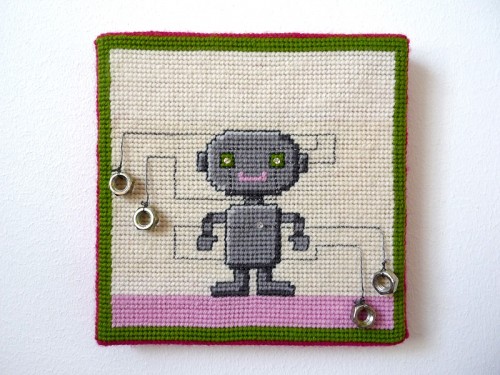 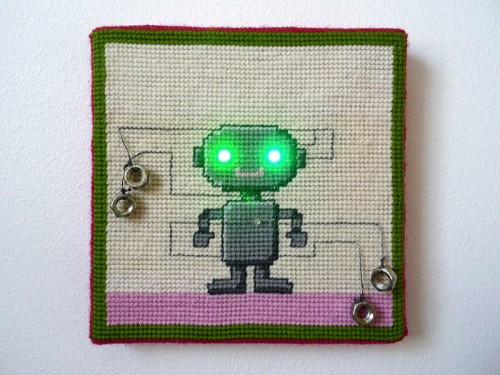 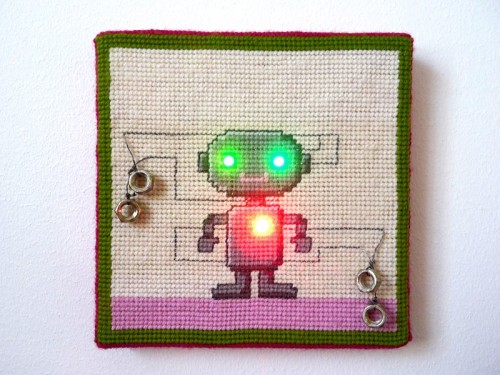 All the works from the workshop were exhibited at Camp Pixelache 2012 on 12th of May 2012. I was really delighted to see that so many of the participants had been so committed to their works that they had finished them and brought them to the exhibition (it’s a common problem with craft works that they are easy to start but sometimes require quite a lot of patience to be finished — I too was a bit frustrated with my work at some point).   My fellow participants had used several different techniques from cross-stitch to 3D embroidery, and all works introduced different ideas in embedding LED lights into the designs. They were used as eyes, stars, lamps and even as a light-emitting esca of an anglefish. There was even one work with solar-powered LEDs. 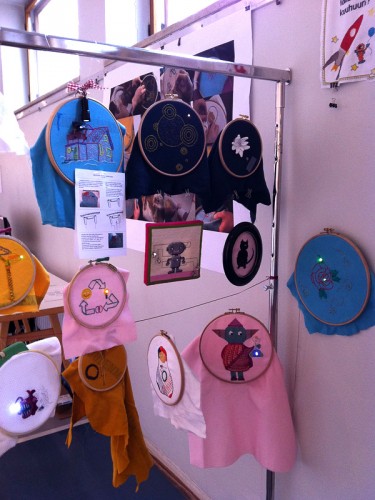 When the workshop was over, I noticed that I had mostly been so concentrated on my work that I didn’t really Do It With Others. I discussed some general ideas and details of techniques with my fellow crafters but didn’t really receive inspiration from anyone. Neither I am sure if anyone got any help from me during the workshop.

Even if I didn’t have a ready plan for the work I was going to make during and after the workshop, I had chosen the technique beforehand. It was already familiar to me, which allowed me to easily plan how my finished work would look like, but I would probably have learned more about crafting if I had chosen a technique I had not used before. On the other hand familiarity was also a good thing: I didn’t need to concentrate that much on the crafting part and that helped me finish my work in time for the exhibition. Needlepoint also fits into the “soft pixel revolution” theme of my personal art projects, so I guess that was a right choice after all. Even if I am a bit perfectionist when it comes to crafting and there are many things in my work I could have done differently, I’m quite happy with it now.

I’m planning to do my part on the collaborative learning by publishing an edited version of this learning report online. I’m also working on a pattern and instructions for my work, planning to give it it to the organizers to be used at coming workshops. I will also publish it online here on my website licensed under Creative Commons to let anyone use it for help, inspiration and maybe even derivative works.

I will also exhibit Needlepoint Robo at MediaLab Demo Day on May 23rd at Aalto Media Factory. In addition to showing it as an example of my own work, I hope that it will make the audience more familiar with the possibilities of crafting and specially e-embroidery in general. Combining traditional crafts with electronics and experimental crafting in general could be a way to close the generation and gender gaps that are associated with textile crafts. They don’t have to be something only your grandmother does.